Over the few years I’ve been involved with Tri-C Karters, LAKC and FKC, one of the greatest things I’ve enjoyed is getting to know everyone’s story. Their story of karting, racing, family, friends, highs, lows. A unique path got them here, and now I’ll be writing them down to share with you.

I had a lot of people in mind once I made the decision to start writing articles, race reviews and blogs on the various series and karting news as to who I was going to interview first. But for some reason, I made an audible and I picked someone that caught my eye who had the positive energy that truly defined what our sport is and should truly be about.

Meet Noah Hambayi, a Masters driver from the MDG Karting camp. He stays quiet when on grid and when out on track, and sticks close to his karting family, so I knew I had to ask him questions about his story and his journey. He races his No. 264 Birel around in Tri-C and FKC, and while I’ve seen him around the track a lot, I’ve never really gotten to know who he was.

I sat down with him as my very first kart driver interview, and boy was this one a blast. We joked and laughed about a few things, but his story starts very late in his life. I’m hoping this is an inspiration to those who feel that ‘it might be too late to get started.’

Noah Hambayi: Right now, I’m racing KA100 Masters. I’m racing a TonyKart up to today. I’m switching to a Birel and racing with MDG Karting. I met up with Stu Hayner who has just been a great support of my racing, but just to be on the same chassis as the rest of the team.

JS: So how did you hear about karting?

NH: I’ve always known about karting and I love motorsports. I’ve always wanted to do something in motorsports. I always thought like many people that karts were like K1, but at the time I couldn’t afford to do anything else, so I was like, “That’s what it’s going to have to be.” It’s just been an amazing experience. They are so much more fun, so much more technical and so much to learn.

JS: Have you raced anything before?

JS: So you grew up loving motorsports, but you never raced anything before karting?

NH: Nope, I grew up loving motorsports, was an F1 fan since I was 12 years old.

JS: How old are you now, if you don’t mind my asking?

JS: Oh ok, wow. So you really didn’t get started until a lot later.

JS: How long have you been racing with Tri-C Karters?

NH: Been racing with Tri-C for one year. This is my first year racing in California. I started racing in Arizona with a club called PKRA. I raced Rotax there for 3, maybe 3 1/2 years with very limited success, but it was fun. That’s where I learned karting and I came here. I stopped karting because I was like, “Ok, I’ve kinda outgrown this and I think I want to move onto something bigger and better.” And I sold all my karting stuff and I bought a race bike, and I quickly discovered – I never tried raced a bike before – I quickly discovered that I didn’t have the balls to put a 600cc motor bike on its limit.

We both shared a good laugh here.

But you know, we drive our karts on their absolute limit. Nowhere near did I have the ability to do that [with the bike].

At that point, I had already sold all my karting stuff, so I didn’t do anything in motorsports for a long time. A year ago, a friend of mine was on Craigslist and bought a kart for $800. He calls me and he says, “Hey, you told me that you raced karts before and I bought this kart for $800. Can you show me how to do that?”

So I met him here at Adams Motorsports Park, and he had bought a 2008 CRG California which was actually my first go kart with a Leopard on it. I drove it and I think I was in like the fifth turn when I realized I gotta come back to this. I had forgotten how good it felt. It didn’t take very long, tires weren’t even warm and I knew I had to come back to it.

JS: Was that pretty much just a bliss after that?

NH: Absolutely. The kart was terrible, and the tires had probably been on the kart for two years.

NH: Yeah, and it was an old chassis that was way too stiff, but I just had forgotten how good it was.

JS: Let’s go back a little further back then because I’m curious about your very first kart race. Do you still remember that?

JS: Tell me about that day.

NH: We had a Rotax Challenge in Arizona at PKRA, and all I was hoping for that day was not to get lapped.

NH: That was my only goal, and I didn’t get lapped!

I learned that I had a lot to learn about karting. And I did, and I got better, but I never really got good. It’s amazing because I’ve been working with Stu and MDG now for about four or five months, and I’m driving better than I’ve ever driven before and I understand it better. Those early days were fun, and I had some success. I love the Rotax motor, a good, easy, reliable package.

JS: What year was this?

JS: So let’s fast forward a little bit. How did you hear about Tri-C Karters?

NH: So I decided that I wanted to get back into racing, and basically just looking at clubs here in Southern California. There are two main clubs. There’s LAKC, which seemed to have a very specific focus. At the time I wanted to run a Rotax because that was what I was familiar with, but I decided to run ROK GP instead. Tri-C was just more the type of club I was looking for.

JS: What made you choose Tri-C primarily?

NH: Because it was a club. LAKC events are – not to bash on them – but every race feels like a regional. We’re not here to have fun; we’re here to race. And there’s a place for that, because that’s racing. But sometimes you just want to be with people that you love being with. If it goes well, it goes well.

JS: So what made you choose to team up with MDG Karting?

JS: Did you meet him at Tri-C or outside the club?

NH: Outside. It also turned out that MDG were running Tri-C exclusively, so it worked out. They provide great support, guidance, helped me make the decision to go from ROK GP to the KA100. I love the KA100. It’s just that good balance of performance that you don’t get out of an LO-206, and the bashing grip that you’d get from TaG.

JS: You remember your first race with MDG?

NH: Yeah, it was actually an FKC (Formula Karting Championship) at Willow Springs, a track I had never been to.

JS: Willow can get tricky.

NH: There’s a lot of hairpins and not a lot of grip. I just had one practice day and went out racing. But one of the things that Stu got me to do was to forget about practicing. When I got my first go kart, I practiced for about a year before I tried to race. I did the same thing here when I bought my new kart here. I was practicing, and Stu just said, “Forget about that, go race!”

Racing makes you figure out where you need to be. Doesn’t matter where you are; there are two challenges in racing, racing yourself and racing other people.

JS: I guess a third too, racing the track.

NH: Well, that is racing yourself, like you trying to conquer the track. There’s you, and then there’s other people. You never know if you’re beating the track if you don’t know how well other people are doing. You can go out there and feel like you’re killing it, it’s great. But that’s irrelevant.

JS: You could end up getting lapped!

NH: Something you don’t want to do to break your goals!

You have to go out and race other people. There’s something about that rabbit, about that kart in front of you that’s exhilarating.

JS: Would you consider yourself a competitive person then?

NH: Yeah, I find myself being competitive, but I always tell myself that I’m not. I had a lap time goal earlier this week, saying, “Oh ok, if I can fix this and this, that’s worth this much time, and if I hit that, I’ll be happy.” And I did, but wasn’t happy, because as soon as you hit that goal, you know there’s more for you to get better.

JS: Fair enough. Tell me some more about your relationship with MDG, Stu Hayner, his crew and mechanics. Why his team, despite there being a lot of great teams out here?

NH: I talked to a lot of teams before I chose MDG, but you gotta be around people you can are comfortable with, people who share your goals, people who feel about racing that way you feel about racing. Is it something you enjoy doing? Not just the people who work for MDG but the drivers just love to race. We’re competitive toward each other, but we’re supportive of each other.

JS: So you guys challenge each other? I’ve seen that from the outside looking in.

NH: Yeah, absolutely. But the support. Karting is challenging. Before I started, I looked at race schedules and a club would say, “We have eight races a year.” And then they say, “You’ll be on the track for qualifying, two heats and a main.” I was like, “That’s boring! I’m going to be there all day, and I’m only going to be on the track four or five times?”

But you quickly realize your race day is much more challenging. I’ve tried to do it alone, but being with MDG makes a difference.

I did a lap before my kart died, and we had to rebuild the carburetor, put in new reeds. That is a challenging thing to do on your own, not that you can’t do it on your own, but it helps you focus on racing.

JS: And for the 2019 regular season of Tri-C, do you have any specific goals?

JS: You want go for the championship? You want to win the whole thing?

JS: What do you think is going to be your biggest challenge?

He laughed first, just saying. More of that friendly spirit coming out.

NH: No, you can’t rely on luck. You will get lucky sometimes, but nobody lucks into a championship. 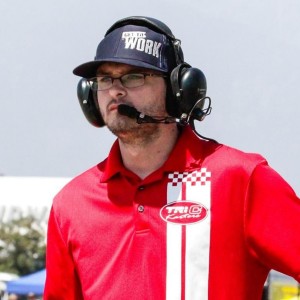 A motorsports enthusiast since birth, Justin Schuoler has been involved in motocross, karting and NASCAR. He is a multi-race winner and champion. He currently works with Tri-C Karters, FKC and LAKC as a flagman, official or announcer. In journalism, he writes for most of the west coast NASCAR races for Speedway Media. His wife is a motorsports photographer, and they reside together in Santa Clarita, CA.
All Posts »